So I’m maybe going to start posting every Friday about the work I’ve gotten done each week.

This week, I barely did any writing because I was deeply involved in this wall painting project. I did my first painting project last year in my bedroom. It was so much fun but so much work, and maybe that’s why it took me so long to do another. For the past few weeks I’ve been slowly designing it in crayon, and then on Friday I finally started painting it. On Monday I literally worked for eight hours straight (and killed my back in the process). I have to say, I never get so involved in writing something that I do it for eight hours straight, and that bothers me a little. For some reason, when it comes to creative pursuits that are visual, I can get and maintain this laser-like focus that is just beyond wonderful, it’s meditative and nourishing.

So every free evening I’ve had this week has been dedicated to finishing my wall. So far this is what I’ve got (above), I plan to spend my night tonight getting done what I can. I’m mixing all the colors myself. I thought that this would be straightforward because I’m doing a value scale – so I’d mix each color with white for the lighter values, black for the darker. Well, the white worked out fine, but the black made every color look like baby shit. So I had to rejigger and now I’m doing a brown blend with the orange, a blue blend with the yellow (which is going to create some really great/ugly avocado tones), and the black mixed with the blue should work out quite nicely.

On Tuesday I took a break from painting and went to this really bizarre event, which was an Elton John charity tennis match. It was so fucking weird. I had tickets to the VIP reception, where I ate food and watched people drop $100,000 at an auction like it was nothing. Then we had courtside seats, except they were BEHIND the players. The first thing I said when I sat down was “Aren’t we going to be dodging tennis balls all night?” Well, we were dodging them, specifically we were dodging Andy Roddick’s 140mph serve. A bunch of old ladies got bopped right in the face, but I was luckier. Anyway here’s a shot of Andy Roddick’s ass – I wasn’t even trying to be a perv, this was just the best shot I could get from where I was sitting. 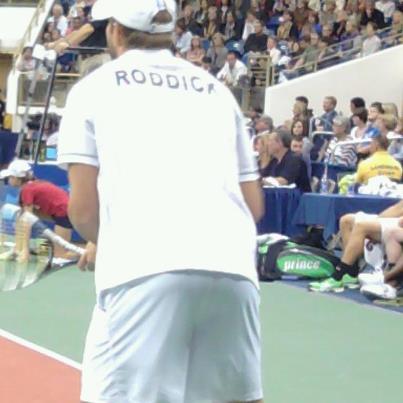 Also, the Tribune Review took my picture at the event with my friend Bart. This photo is copyrighted by them. The guy in the loud clothes always gets his picture taken…